Polar expedition with Marine 450U (part 2) 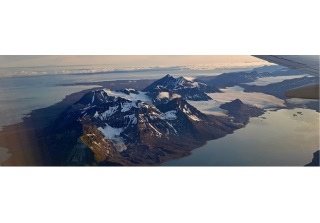 The expedition flew from Prague to Stockholm and Oslo where they were welcomed by rainy weather and the sky went completely dark while the crew were waiting for a connection to the town of Longyerbyen - the administrative centre of Spitsbergen.

At midnight we can already see whitish, pointy peaks covered in sunlight on the horizon after which Spitsbergen have their name. At about 40 minutes after midnight we are landing in Longyearbyen which is sadly covered in local clouds but the surrounding hills are beautifully lit. We are excited to meet Eva from the Polar centre who will take us to the town approximately 5 kilometres away.

We quickly go say hello to a few friends in the morning then go to the post office get letters and packages for the Polish polar station and a fast boat called Anna is already waiting for us in the harbour. It is a ten-seat covered motorboat Targa 37 with two engines with overall power of 800 hps. We used to use our Polish friend’s and seafarer’s Jurk Rozanskieg yacht for transfer to the Hornsund area where we will be working. He travels in any weather but last time it took 30 hours in the 4-metre waves. We now have outstanding conditions, unbelievable calm sea and extremely strong engines below deck.

After a four hour journey on and often even above the water surface we are landing at a 230 kilometres distant fjord Hornsund in the Isbjornhamna bay which in translation means the bay of a polar bear. There is an all-year working Polish polar station, where we get our supplies, ropes, equipment, food and also our aluminium boat Marine 450 U. She is still on a pallet in order not to get damaged during transport.

We are getting our material from the boss of Báza (the station) and the colleagues are helping us getting the boat ashore using a tractor. Four pallets of barrels with material and a big crate with the boat’s engine and more equipment quickly follow. Lastly we are taking a large crate with our firewood aboard.

There are no trees here at Spitsbergen. The only source of wood is the sea which brings so called driftwood – mostly large logs of wood from Siberian rivers. These logs then travel with water currents and through the icy North pole and they get subsequently rid of all branches thanks to the ice. After that they get washed up as a result of storms. Because we travel in National parks, there is a strict prohibition of collecting wood on shores. So everything that you require you need to bring with you, except for water but we will get to that later.

Our colleagues from the Polish station are Informing us about the worsening weather and so we quickly begin to pack our stuff, polishing last details on our boat for example attaching the oars, because when there is a malfunction to the engine at sea, your only chance of survival is using your own hands. After that everything is swiftly taken aboard that we even cannot take any pictures. Weather is changing really rapidly and thick fog is pouring at us from the sea. On top of that there is an extreme low tide so our boat is now fully loaded stuck in sand. But we are used to solving such problems. If four horsepowers (the crew consists of four members) engage, the boat is successfully pushed to the water.

Just after we set sail we are passing first cliffs and we are immediately getting swallowed by fog. It used to be a big problem – in these waters there are cliffs and rocks just beneath the surface even 1 kilometre from the coast, so you have to sail far away from it and it can become problematic to navigate. With today’s GPS technology the situation is far easier but even still sailing in fog is quite troublesome and risky.

At about midnight we are carefully approaching the rocks and waiting whether there will be a cabin Hyttevika. Technology did not fail us and we are safely landing at our future home – an old hunting cabin Hyttevika which is now pronounced as a historic sight by the Norwegian government.

It is midnight, you can feel the sun above the fog but at foothills the fog is still strong. We are quickly unloading all the material at in pairs coming back for the rest. At four a.m. we are completely moved to the proximity of the Werenskiold iceberg.

After a well deserved ten hour sleep we are waking up to a beautiful day. No sign of fog and we are going to find out what neighbours from the animal realm there are out there. But that is a story for another day. 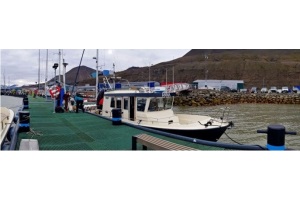 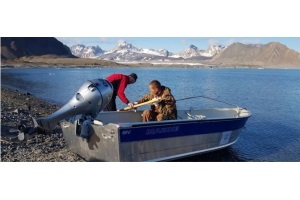 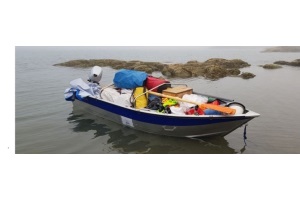 Transportation of the aluminium boat Marine 450 U to the shore. 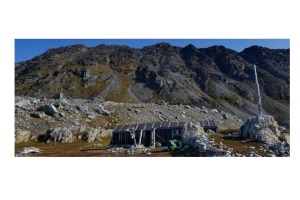 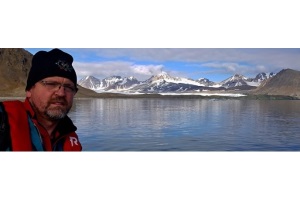 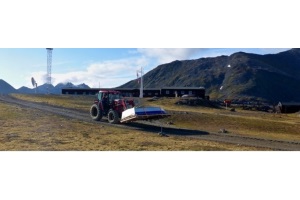 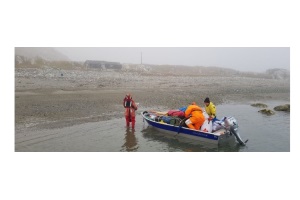