Polar expedition with Marine 450U (part 3) 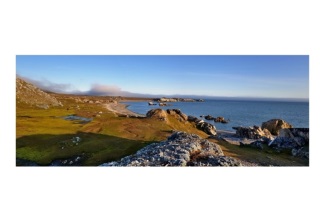 I am going to begin our third stop in northern landscape of the Svalbard archipelago by discovering that here in the polar bear kingdom the electronic mail travels on foot. Four our colleagues from the main Polish polar station in Hornsund brought us an envelope with several printed letters from two weeks ago. Our advantage is that there is another station of the University of Wroclaw about six kilometres behind us and since we have good relationships we can cooperate. A tea invitation or a sit-down in warmth is natural as well as forwarding the latest information about the whereabouts of bears.

Our polar expedition under the Řehák – SPELEO company has acquired permission from the local governor to use an old hunting cabin Hyttevika, situated in approximately 50 metres wide lane of coast, beyond which a 500 m tall peak of Gulliksen rises. It is a brilliant place for a hunting cabin because almost every polar bear which passes through from the North and following its primal instincts continues further to Hornsund. They have to go through this narrow place in order to get back to the northeast islands.

I have to further clarify the term hunting cabin. It is a wooden narrow building almost 3 m wide and about 11 m long. It is wrapped in duct tape from all sides and from the back side is leveled with clay and rocks. A tall European can straighten up only in the middle just beneath the top of the roof insulated with old newspapers. Four thick logs protect the entrance from curious polar bears. They are always put into the door even if we leave only for a couple of hours. This ‚shack‘ is a strictly protected natural cultural sight and most of the arctic explorers who have been there can confirm that it is on of the most magical cabins in Svalbard.

Hyttevika’s appeal is hard to describe, you just have to experience it. This cabin has been our base, our little but cosy and warm home for several expeditions. We always come back there wet, sometimes tired to death from travelling to icebergs, glacier caves and deep wells around. Our research program is focused on documenting of changes and development of icebergs and their draining systems – glacier caves, wells and channels and just those systems in general.

We are experiencing beautiful moments at Hyttevika. The midnight sun literally pours over the whole coast with its golden colour, soft shine and long shadows as you can see in the pictures, taken in midnight sunlight in perfect weather. White rock of the Hyttevika bay continue the lane of coast to the North named Kvarcittodden, which can be translated as a Quartz promotory. It really glows through its many white quartz rocks.

Within the scope of the preparations and testing of the gear Szymon and Anka (Polish part of our crew) took our aluminium boat Marine 450 U and engineless (only with oars) went straight into the bay. The boat is excellently controllable so we did not even have the time to watch where Szymon hid because of the swiftness with which he was going. Then suddenly we noticed that the boat is moving noticeable slower than before even though the oars go at full speed. After a while we knew exactly why.

Szymon and Anka caught a several tonne weighing floating iceberg at sea and dragged it tied to oars to the bay. Since there is less than 5 m of water thanks to the underwater rocks, the floe remained sitting on the bottom and Szymon cut an approximately 200 kg large piece and dragged it to the shore. We cracked the floe to smaller pieces and put it into pots and buckem that we found in the cabin. We thereby acquired a 1500 years old high quality iceberg water – possibly from the Hans glacier or one of the fjords. The big floe remained in the bay for almost two weeks before the wind and water currents blew it further North during the high tide.

We had planty of neighbours from the animal realm around the cabin that kept us company but about that in the next article. 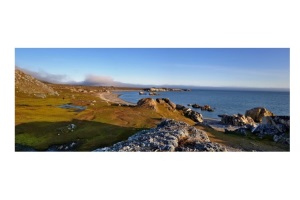 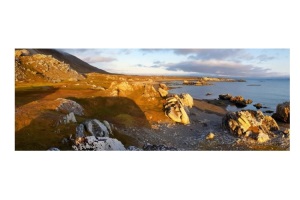 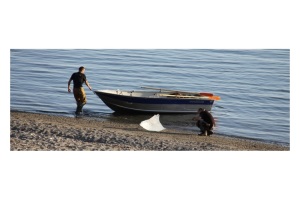 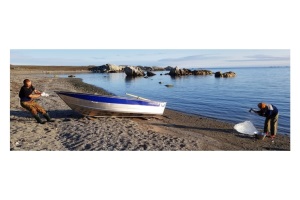